In today's world of a global pandemic, it must have felt anxious for those people who are working in the film and TV production industries. Not only they are unable to go abroad for filming, but they are also restricted everywhere domestically. The spread of the COVID-19 has indefinitely disrupted ongoing plans that were pre-planned meticulously and are forced to find another way out. As for the post-production industry, the majority has even surrendered when it comes to transfer massive amounts of raw footage from one point to another. Fortunately, we could count on the long-standing habits derived from the animation industry and leave this annoying matter to Raysync High-Speed File Transfer Software!

A few months back, we were lucky to be offered an opportunity to try out Raysync and the more we used it, the more addicted we became, so much that we forgot to share it out. There are hundreds of products of the same nature such as Caton Cydex, File Catalyst, TransferXL, MASV, AWS, etc. but what makes Raysync stand out? There is a theory that the worst a product is, the more it would try to pretend to be invincible. Likewise, the more powerful a product is, the more understated it is. There are certainly other good products in the market such as Cydex, which is also my favourite personally, but Raysync is one of its kind that is so simple as breathing or drinking water. 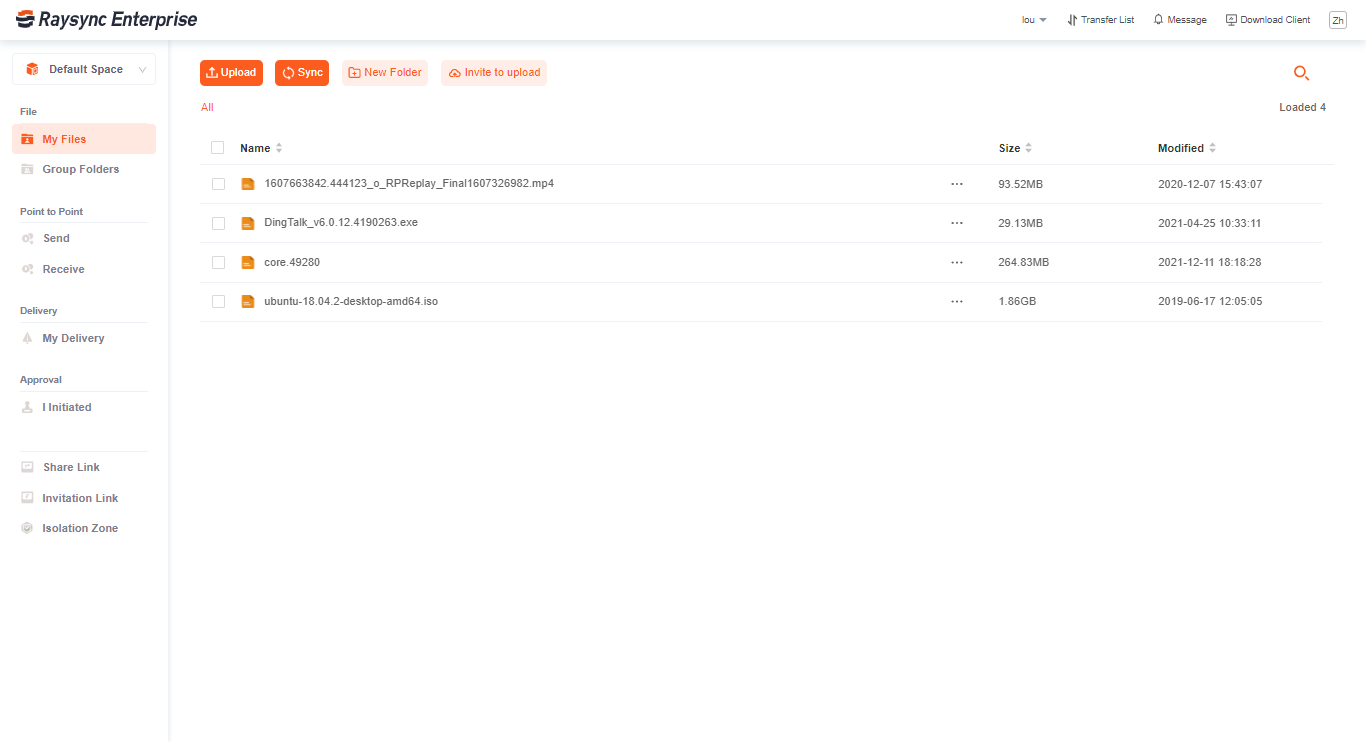 We mentioned deriving habits from the animation industry in the beginning. In fact, Raysync’s key team is the development team behind the well-known render farm “Fox Renderfarm”. With years of experience in the animation and special effects industry, the team has a deep understanding of the requirements for remote work, file synchronization, multi-access and permission control. It is not a surprise that the team would introduce a product of their own. The whole operating including its interface, processes and functions are quite satisfying.

At first glance, the main interface of Raysync actually looks “scarce”, too simple that makes it easy to doubt its capabilities, but this is also one of the problems that most similar products are criticized for: The more setting parameters it showed, the more dedicated support it needed, and thus further away from general users, even further from the targeted group in the film and TV production industry. Raysync's user interface was designed with an "easy-to-use" philosophy in mind that Assistants, Business Personnel, Producers, Directors, Designers, Editors, Compositors, Animators, and even Bosses would figure out how to operate the software at first glance. I have even given it to my friends who work as teachers, screenwriters and designers to try, they could easily figure out how the software works and operate it by intuition. I think Raysync's easy-to-use interface is a highlight for the common users which is very convenient. 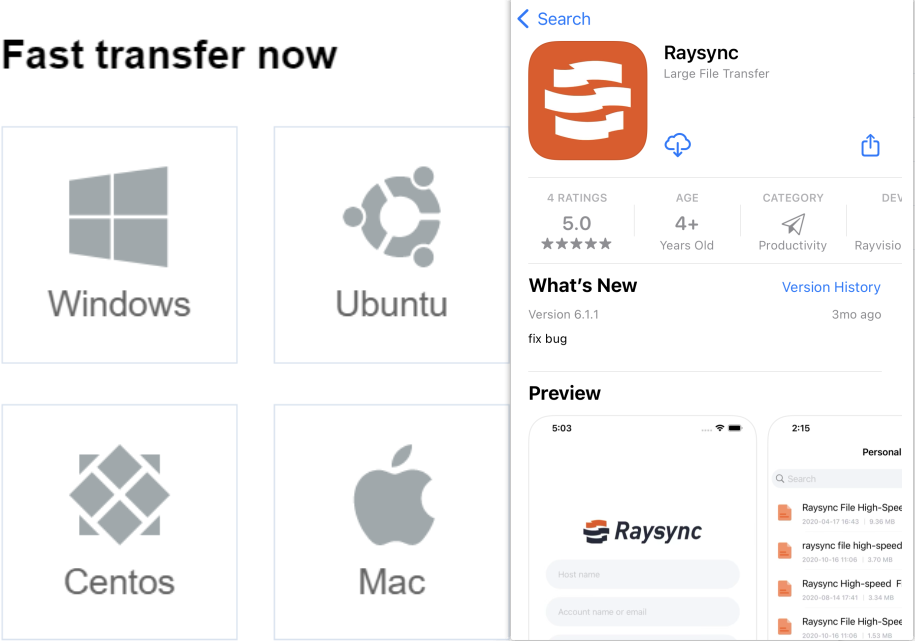 Now let's look at how many platforms could Raysync support: It's a definite for Windows, Linux is supported as it is essential to large-scale production companies, and macOS is also supported without a doubt considering its popularity in the Audio/Visual (AV) field. It should be normal with all the above platforms being supported, but Raysync also supports iOS and that's kind of surprising. I have come across many large file transfer management platforms before, but many of them could only be used on a desktop environment. When it comes to mobile devices, they have always paid less attention to perfecting it with the excuse of security and inconvenience in management. Trust me, imagine bringing an iPad out to discuss a proposal while needing to dig out a scene, a mock-up or something similar, most people would only archive a finished product but rarely note down all the items during production. But as long you have backups periodically, Raysync does come in handy to help you find anything you want within its mobile app that provides viewing and browsing without editing rights, thus eliminating the risk of accidental modification and deletion. Even if you accidentally lost your device, the risk is also minimized. According to Raysync, its Android version is currently under development and I believe it should be on its way to the public soon. 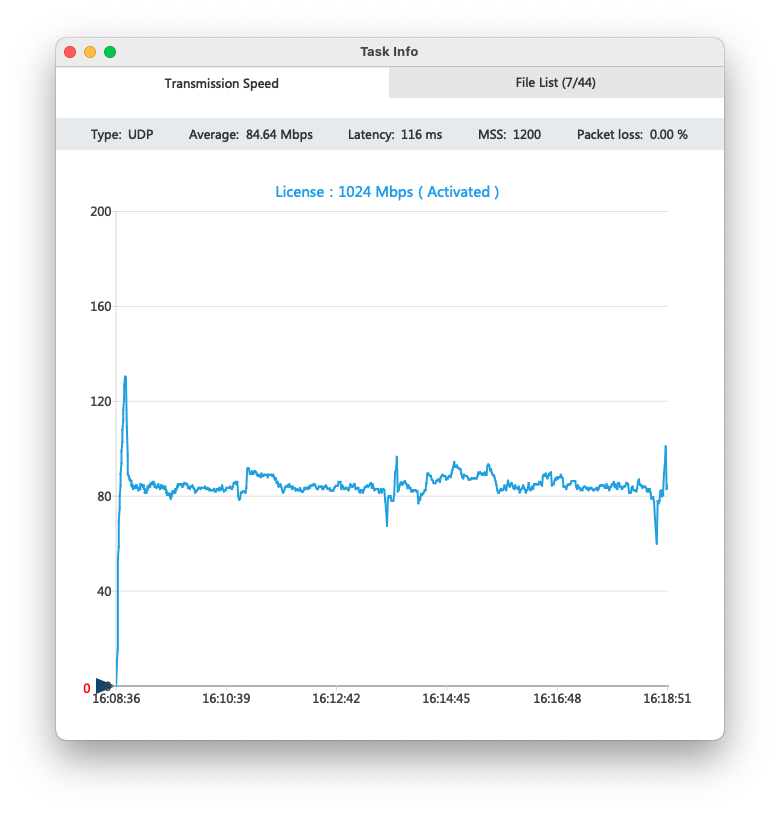 Following the introduction of the UI and supported platforms, now let’s talk about Raysync’s transmission method. This is also the main reason why I’ve been mentioning simplicity and security in the previous paragraph, I think people who are familiar with internet transmission should have already guessed by now that Raysync adopts UDP as its transmission protocol. The UDP port can be simply enabled through your office, studio’s network firewall or the router’s settings. Compared to TCP, UDP’s stability, security and risk of interception are all-round superior. In addition to adopting UDP, Raysync also added a public key authentication that only certain accounts or trusted devices are authorised to receive data. It is a terrific design for common users like us who have poor awareness of cybersecurity. 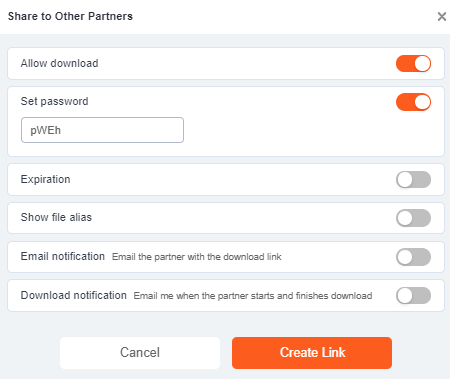 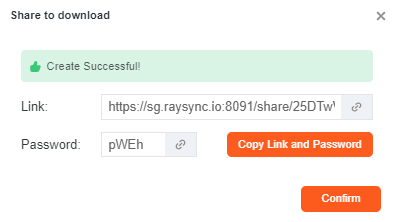 Perhaps at this point, some people may still have doubts about how secure Raysync is, so this is a great opportunity to mention how many services Raysync actually offers. From the most fundamental ones to large file transfer, Raysync also provides acceleration for SSH, FTP and Proxy as well as massive transnational data transfer services to many industries such as Advertising, Media, Financial, Government and so on. These corporate giants especially the finance and government agencies demanded the highest grade of security requirements which Raysync delivers, so we have nothing to worry for. For instance, if you enter a wrong password too many times, the user account will be locked out and a protection mechanism to prevent brute-force attacks will be in place, so please feel at ease. 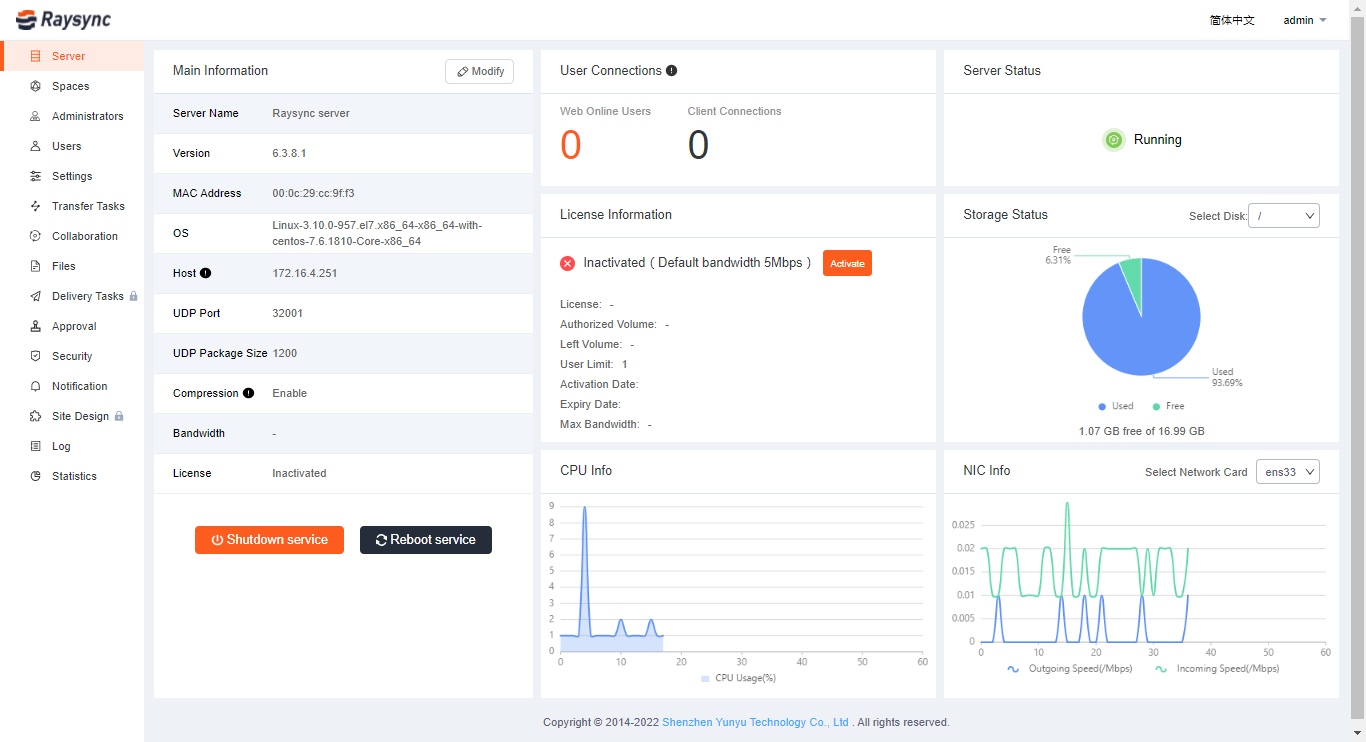 In practice, when we are out for a site recce during pre-filming, we could create a shared folder and take photos with different composition, angles or details that could represent the scene, then take notes and upload them after discussion. This is especially useful when one can't have a face-to-face discussion with the photographers and post-production directors or when people are working across different locations and time zones, you can directly access the information compiled by your partners from the site recce and ensure that everyone has the same information. While discussing cinematography during the preliminary shooting, it is good to get into the habit of archiving massive data, establishing metadata and upload them. So when the filming permit gets approved, everyone arriving at the scene will at least be synchronized in regards to the concept and preparation, saving massive amounts of time compared to the previous shootings. Even during the post-production where editing and after effects needs to be in place, there is also a series of logic and parameters that can be followed for less unnecessary effort.

Of course, to be fair, Raysync does come with its shortcomings, such as the need to open a specific port at the router. Although it’s very simple to operate, I think many small studios would probably have surrendered on this. Followed by the operating cost, which should be higher than having a home-based mid-level NAS. Although its speed and security are superior to NAS, you have to know that the folks in Taiwan have been particularly obsessed with the cost-performance ratio to an astounding degree. There is no way to reverse that in a short time. Perhaps SMBs or companies with a longer and more stable history would consider this type of product that needs maintenance.

At this point, you might have felt like you've gotten some info from reading my review but felt nothing concrete at the same time. In fact, I had the same emotions from using Raysync in the beginning. I was neither using it specifically for dedicated tasks nor does it offer anything special to me, but it somehow integrated into my work seamlessly without my perception. When I realize it, my site recce, proposal planning, on-site shooting, post-production process, review and submission of films, etc. have already had Raysync's traces on it, supporting these tasks silently behind the scenes.

Wait what? You were saying you don’t have a spare computer to act as a file server? Or why not just purchase a NAS? Or maybe you have no idea or doesn’t have the permission to open a specific firewall port on the router? These are some of the minor issues that Raysync’s support team dealt with on a daily basis. They could help you to deploy on a virtual hosting server, just like how websites are now popularly hosted, with the option of selecting as much storage and transmission bandwidth you desire while eliminating the need for hardware maintenance. So the amount of resources determines the power of your network, if it could help you to accomplish your projects, then this small cost could easily be justified!